A new Chair and new Director have been appointed to the Board of Visit Sunshine Coast (VSC), it was announced yesterday following the Annual General Meeting.

David Ryan had been elected as the new Chair, replacing Grant Hunt, who stepped down following the completion of his three year term.

Mr Ryan is a Sunshine Coast resident who brings to the Board an extensive history of executive and board positions in major financial organisations and tourism groups. He was a non-executive Director of Virgin Blue and fulfilled a number of roles over a 15 year period with the Virgin Group, culminating in his appointment to the Global Advisory Board of the Virgin Group. Since joining the VSC Board in 2015, Mr Ryan has been Chairman of the VSC Risk Management and Audit Committee.

In other Board changes, long-serving Board member Ian McNicol stood down after six years, and will be replaced by Ashley Howden and Fraser Green was reappointed unopposed in the member-elected director’s position.

The new appointments were announced as Sunshine Coast Airport revealed that it had attracted over one million annual passenger movements for the first time.

New VSC Chair, David Ryan, said the Airport’s stellar performance had contributed significantly to the region’s 2015/2016 tourism success. With the drive market complementing the growth in air traffic, the Sunshine Coast grew its domestic visitor numbers by 7.8% to 3.1 million for the year, and expenditure grew by 6.2% to $1.9 billion, the region’s best domestic figures in over a decade. The international market recorded 3.5% growth to 366,000 visitors and expenditure increased by 26.7% to $245.3 million for 2015/16.

“It has been an outstanding year of achievement for Visit Sunshine Coast,” said Mr Ryan.

“We owe a debt of gratitude to former Chair Grant Hunt for guiding the organisation to this position of strength in what is still a fairly turbulent global tourism landscape.

“Grant brought his wealth of knowledge and experience to the VSC Board and during his tenure, the organisation was reshaped and relaunched with a new vision, direction and consumer-focused name. His efforts have contributed to VSC developing into one of the most innovative and successful regional tourism organisations in the country.

“I’d also like to recognise the significant contribution and tireless work of Ian McNicol during his six years on the Board, during which time he also served as Deputy Chair for two years.

“On behalf of the Board, I’d like to welcome Ashley Howden, CEO of KJR, a leading Australian IT and digital consultancy business working predominantly with ASX 200 and Fortune 500 companies. Ashley will be a great addition to the Board and we look forward to his expertise in the digital marketing space.

“We move towards 2017 and the 50th anniversary of the naming of the Sunshine Coast with great optimism. 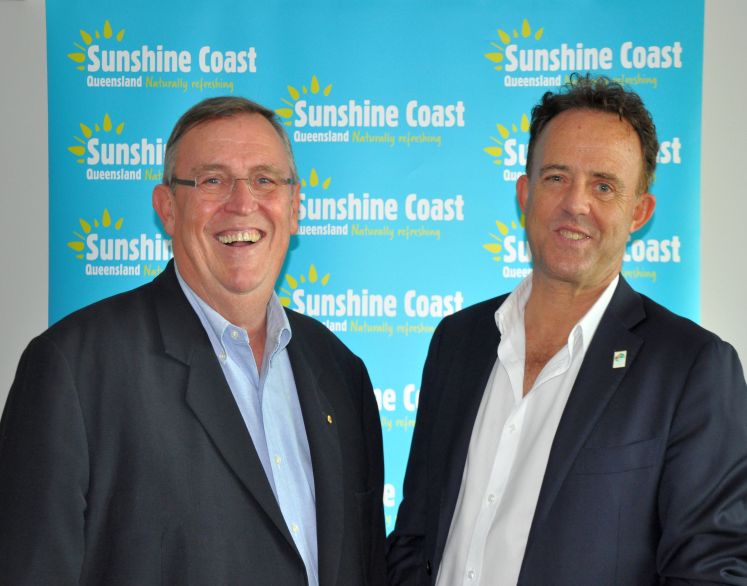 “This was reflected in today’s announcement by Sunshine Coast Airport that they had passed the one million passenger mark for the first time. They have been the fastest growing airport in Australia over the past year, and with the recent confirmation of the extension and upgrade to the Airport, we can look forward to growing our air capacity even further over the long-term.

“In addition we have had great success in the drive, cruise and events markets over the past year, and this has stimulated tourism development, including proposals for new 5-star hotels and a $400 million themed water park.

“The Visit Sunshine Coast team, under the leadership of CEO Simon Latchford, has kicked many goals recently, including the development of a state-of-the-art new website, an innovative Food Trail to showcase the region’s high-quality food produce, and the ‘World is Coming to the Sunshine Coast’ events program.

“The figures from the past year have demonstrated unequivocally that our marketing campaigns have created a very positive and powerful image for the Sunshine Coast, which is producing outstanding results for all areas – from the coastal towns of Caloundra, Coolum, Mooloolaba, Maroochydore, Noosa and Rainbow Beach, through to inland destinations in the Hinterland and Gympie areas.

“The success of the tourism initiatives reflects the collaborative spirit of the region’s local tourism organisations and operators, along with Tourism and Events Queensland, which has allowed us to maximise the potential of the region’s tourism assets.

“We have enjoyed great support from the Sunshine Coast and Gympie Councils, who have consistently demonstrated strong, incisive and progressive attitudes towards – and support for – tourism. The industry has played a key role in driving economic development and jobs for the region’s businesses and general community.

“We are looking forward to celebrating the 50th anniversary in style. So much has been achieved over that period, but we recognise that 50 is just the start of the innings – there’s a vast amount still to achieve.”

To access a copy of the 2015/2016 Visit Sunshine Coast Annual Report go to: www.visitsunshinecoast.com/corporate